Our Featherboard and Square Trellis panels were used to create the perfect shared boundary to keep both sides of the fence happy.

Our Featherboard and Square Trellis panels were used to create the perfect shared boundary to keep both sides of the fence happy. 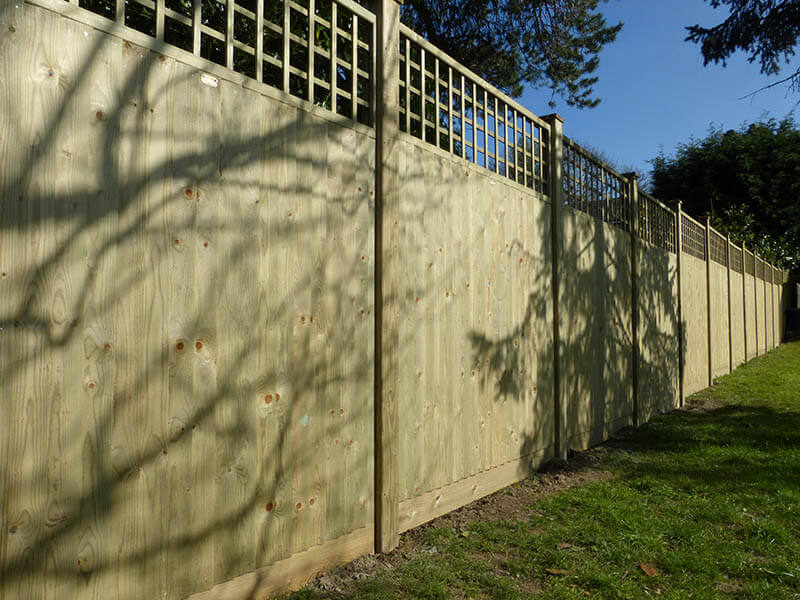 To complete the work - Caterham Fencing, a well established local fencing company with over 30 years experience based in Caterham, Surrey who has been a Jacksons Approved Installer since the scheme began. With that experience comes a fine eye for detail, and the ability to create a solution for any tricky fence run.

In this blog, we sit down with the owner of the property to discuss this fencing project from start to finish, the challenges, and the excellent work by our Approved Installer Caterham Fencing.

Why did you opt for this combination of panels - Featherboard and Square Trellis?

The whole project stems from the fact that, over the years my neighbour on that side always opted to renew that fencing himself, if wind-damage occurred. The problem has been that, with annual very strong winds here, traditional horizontal lap panels with 3x3 vertical posts have not been strong enough, and the fence was regularly damaged.

The whole appearance had become lacklustre, and this year the very strong winds played havoc with the fencing, blowing down two or three panels completely. I suggested to my neighbour that I would get in what I considered the best firm - Caterham Fencing to undertake the project from the house to the bottom of the garden.

What made you chose Jacksons Fencing over other fencing brands?

It was simply, I wanted Caterham Fencing to do the work and Nick Wermann would obviously choose Jacksons Fencing.

Nick installed fencing at the back and at the other side of my back garden last year, following very extensive landscaping work done by a firm that Nick had recommended to me. The fencing he installed looks superb and there was never any doubt that we would ask Nick to use Jacksons again, to supply the fencing for the recent project. 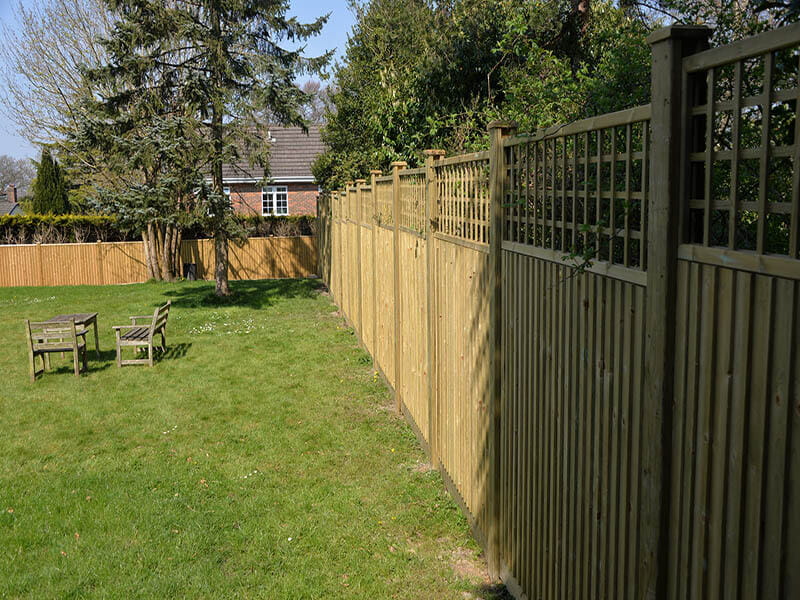 Why did you choose to include a trellis topper?

It was important that the fencing, was suitable to the needs of my neighbour. I have always gone for a garden that is as much grass and as little anything else as possible! However, my neighbour prefers to have a lot of plant growth along the fence and obviously parts of these plants had tended to attach to the fence and the trellis that he previously had in place; so obviously it was best to have the new fencing also trellis topped. The only real concern my neighbour had about going for such a radical replacement of the fencing was his concern for what might happen to the plants. Having a new trellis obviously alleviated any concerns he had, although obviously it will take a little while for all of his plants and flowers to attach to the new trellis completely. 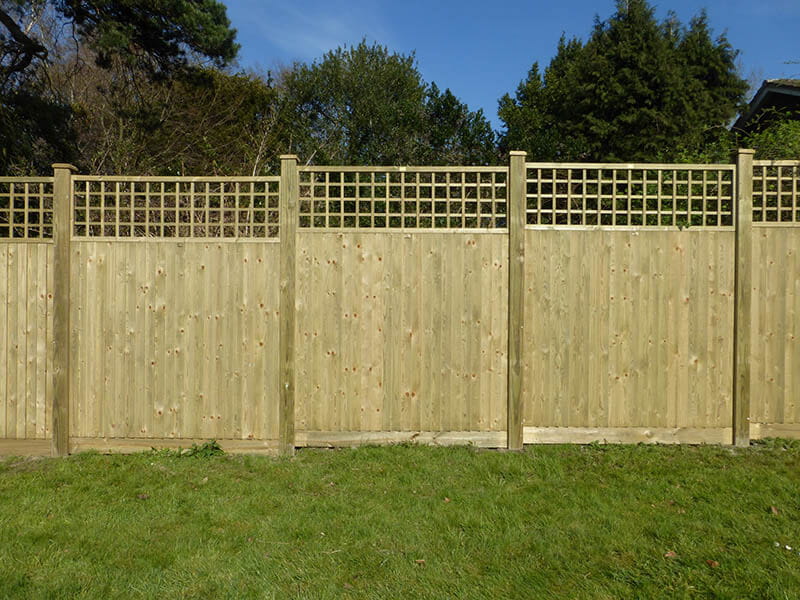 How does your new fence compare to the old?

The previous fencing lacked unity, some of the panels were a little bit ‘rickety’ and the line from top to bottom was not as straight as it might have been. In addition, with the incredibly strong winds that we have every year, the traditional system of panelling, with 3x3 verticals, and half-height concrete supports just did not cope with the wind; and the fence regularly came down in one or other place, which resulted in piecemeal repairs, which contributed to the lack of unity in the appearance of the fence. 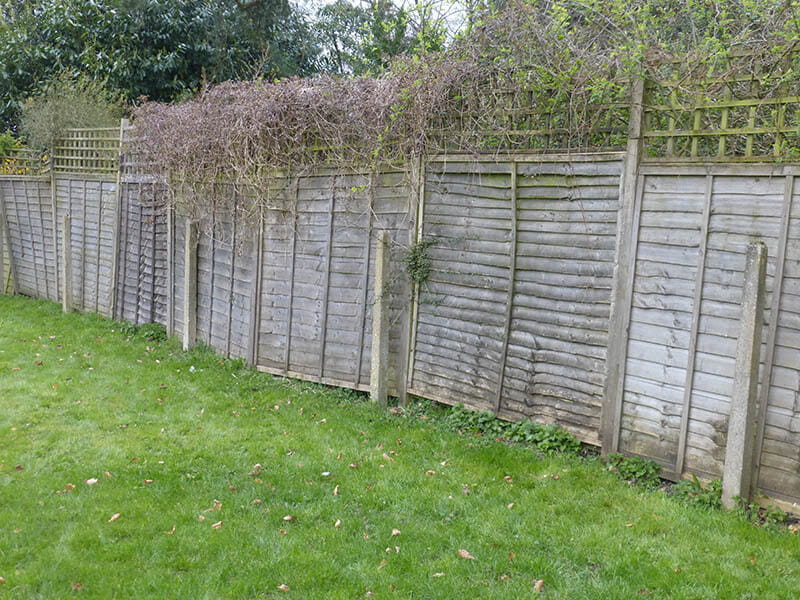 Jacksons fencing is universally agreed to be very good-looking, and it mellows into a marvellous colour, which – facing West/South West, in this case, – picks up a lovely mellow light in late afternoon and evening, which we have already remarked upon in the recent excellent sunny weather.

Did you look for alternative materials instead of timber fencing?

No, although my initial plan, for the work at the bottom of the garden, which Nick did last year, was maybe to go for a metal fence. Nick provided me with pictures of the sort of Jacksons metal fencing that we might have, but the very attractive appearance of the wooden fencing won the argument in that earlier project and there was never any doubt that timber fencing would be best again in this most recent project. 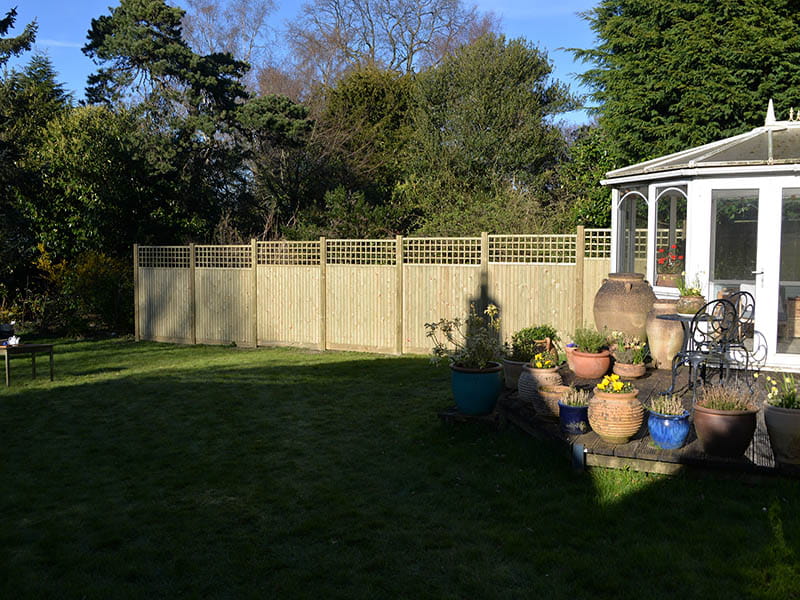 We have been extremely lucky to find Caterham Fencing to do our various fencing projects over the past 18 months or more – and our garden shows the benefits of his work, front and back.