Downsizing to a home in a quintessential town in Kent; Sandwich is a popular place to live due to its proximity  to the coast and historic streets.

Let it be known, homes and gardens within the centre of the town may not be the largest but they're packed with character. 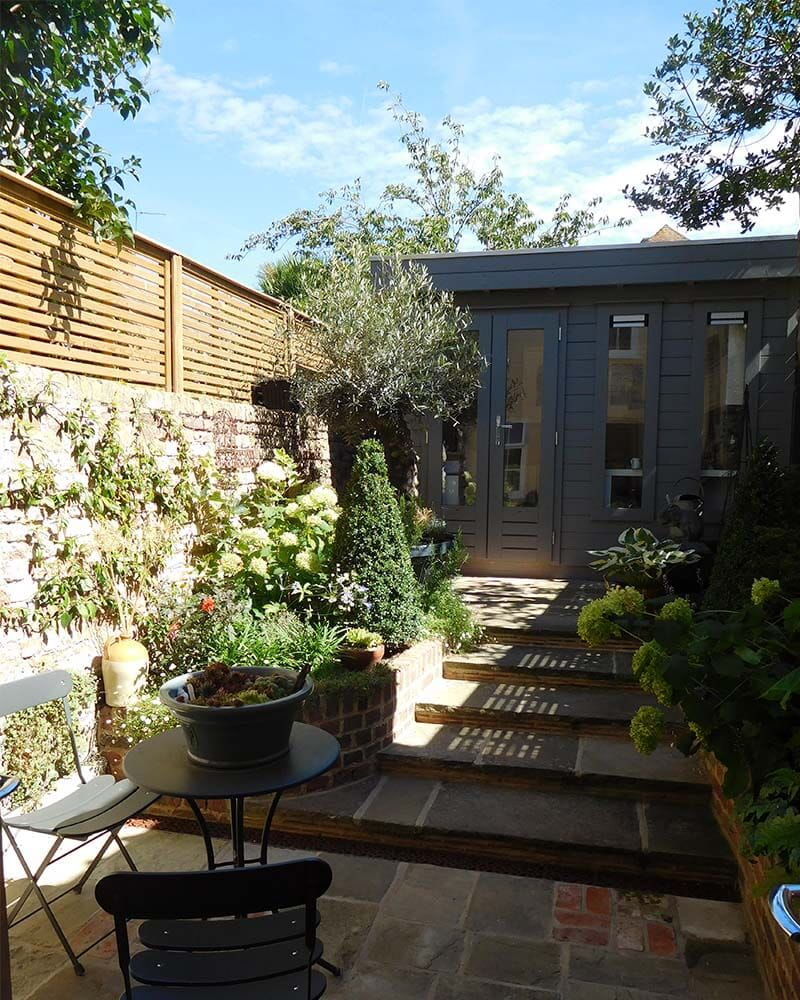 The garden measures 26m2, and critical for the needs of the client was a workshop installed at the rear of the garden, which the garden design had to accommodate and work around.

The original garden was very imposing. From the kitchen doors at the back of the house, steep, short steps led directly up to the garden. This made the kitchen dark and feel enclosed. It was also not easy to access as you were immediately faced with very steep steps as you opened the door.

The existing surface had been paved in some areas, block paved in others, and in general had bits added to it over the years. The levels were uneven and the clients were concerned about drainage as all the water was directed down the steps and towards the back door.

They wanted enough room for a table and chairs, to have raised beds instead of pots, and a place to wash down their new puppy after walks.

The build was extremely challenging but Earthstone Landscapes took on the challenge head on.

To begin with, the new garden plan involved excavating approx. 5m3 of the existing garden in order to reduce the level down to the same height as the kitchen floor. The only access to the garden was through the house, and with low ceilings and several chicanes it was not possible to get a mini digger in. Therefore, all of the dig out had to be done by hand, loaded into plastic bags and carried through the house. In addition there wasn’t room for a skip on the road. Sandwich is a medieval town and most roads were only built wide enough for a horse and cart. The debris had to be piled up periodically, collected in loads, and taken back to a skip located at Earthstone Landscapes' yard.

The Venetian panels were used to allow light into the small space. The old fences on both sides were actually the neighbours', and had to be installed in their gardens. The post holes had to be dug with great care as they were adjacent to an old listed wall. The fence panels were then secured to the posts instead of using wall plates leaving the listed wall untouched. Venetian fence panels are perfect for small gardens. Light is able to stream through the gaps within the panel but it gives a degree of concealment that makes the garden still feel private and like no one can see in.

Once the reclaimed York stone paving started to be laid, it felt like things were finally moving forward.

Unique features include some reclaimed brick and Kent peg tile panels incorporated amongst the York stone. The risers for the steps were also faced with Kent peg tiles.

A dog washing station was made from a sunken butler sink with a wrought iron grate placed over the top. The dog could then stand and be washed down easily. The water from here was also directed into the soak away. 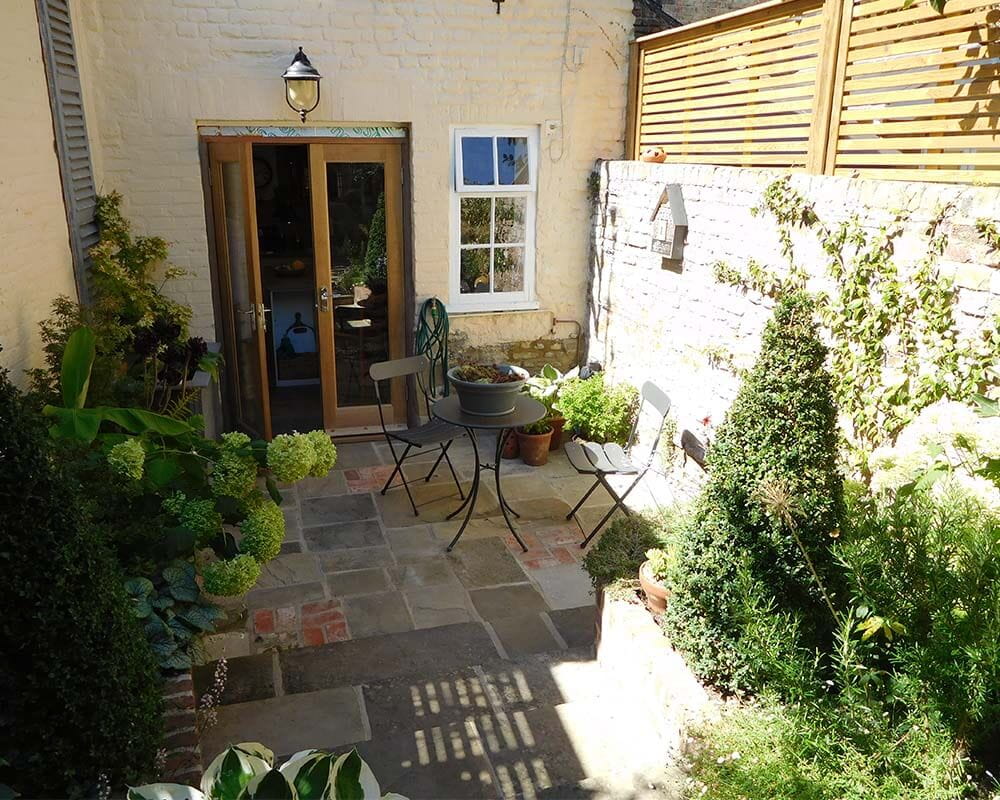 The clients had an old sleeper bench that they had owned for years and had sentimental value. It was included in the design, however it was modified it to work with the space.

Plants, including some of the clients own, climbers, perennials, shrubs and bulbs were all placed and squeezed in.

Three lights were installed to up light the two clipped Buxus cones and the existing holly tree. In addition, a strip of lights was added behind the ornate linear drainage covers to make a feature of the wrought iron grates in the evening.

It was important to use reclaimed materials where possible. The aim was for the garden to complement the property and surrounding town of Sandwich. 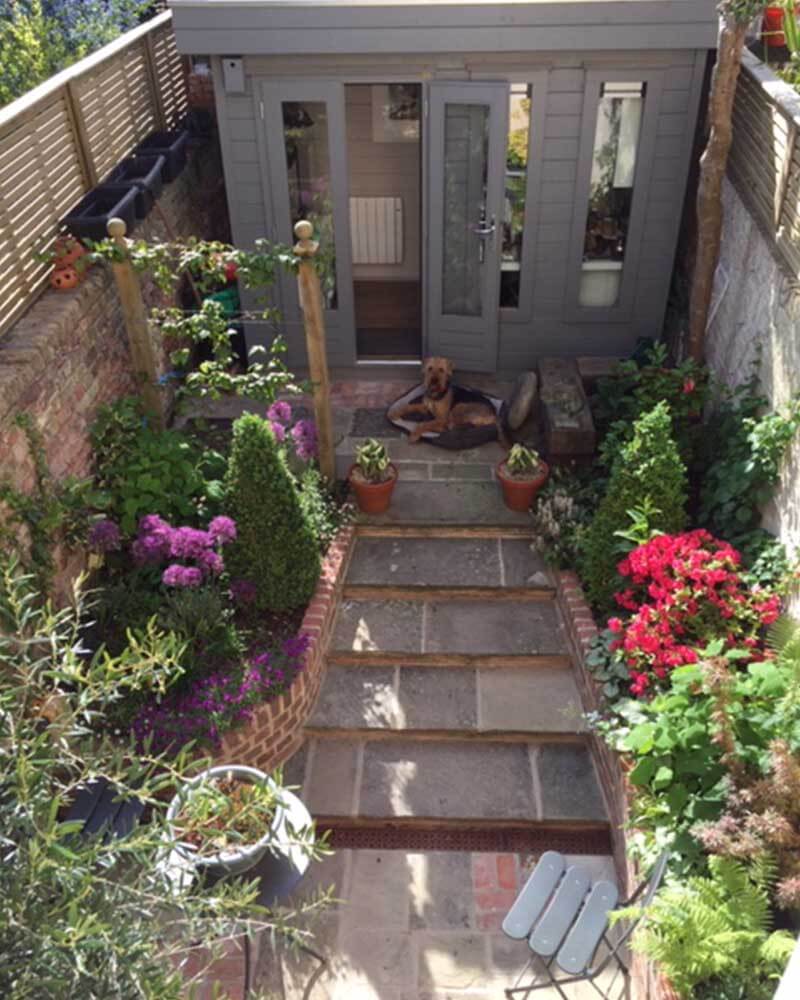 The garden was recently entered in Association of Professional Landscapers and made it through as a finalist in the 'project under 20k' category.