To commemorate Armistice Day on its 100 year anniversary, Canterbury College have teamed up with multiple partners and suppliers to commission a piece of work to represent conflict, and the loss of human and animal life during the First World War. Sadly, eight million horses died, and many of them travelled through Kent on their way to the continent. The horse is presented with dignity, its head bowed in respect and solemnity in this place of quiet contemplation, reflection and remembrance of those fallen. 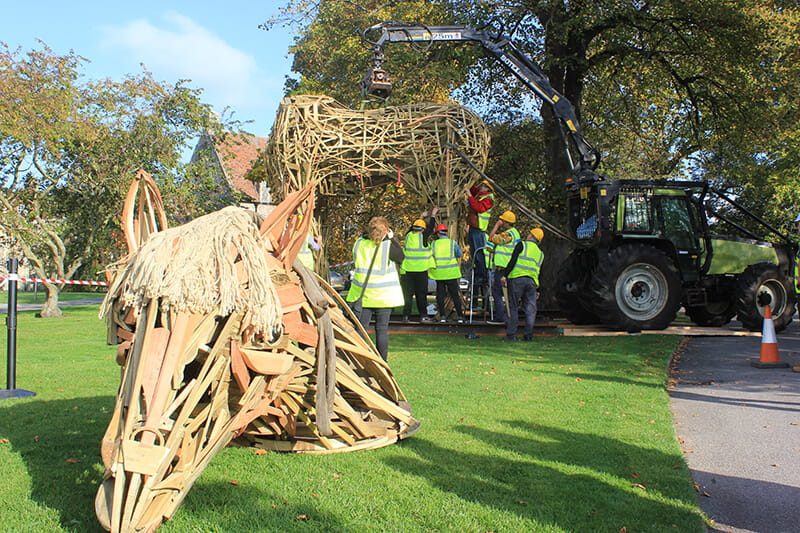 Jacksons Fencing were delighted to be asked to donate materials to make the horse, and the whole sculpture was made from our timber offcuts, with our straining posts used to build the supporting structure. The horse stands at 20ft tall, and was assembled by a small crane and team of workmen. The poppies are being made from recycled bottles by a number of community groups in various workshops.

Sustainability has been a key issue throughout, with the use of donated timber, and rope from Chatham Dockyards Rope Makers, and poppies made from plastic bottles, it is inspiring what can be achieved with materials which otherwise would have been discarded.

One student stated how valuable the experience had been; they learnt construction skills and how artists complete a commission for a client and through the project they were able to think about conflict both past and present.

The horse is being installed in the Cathedral precincts and will be there until January.

Read more about the project here.

Canterbury College previously used our timber to create another sculpture of something a little scarier than this! Read about it here.