After a reckless driver drove into the fence on the boundary of the property, the owner needed to get it replaced. 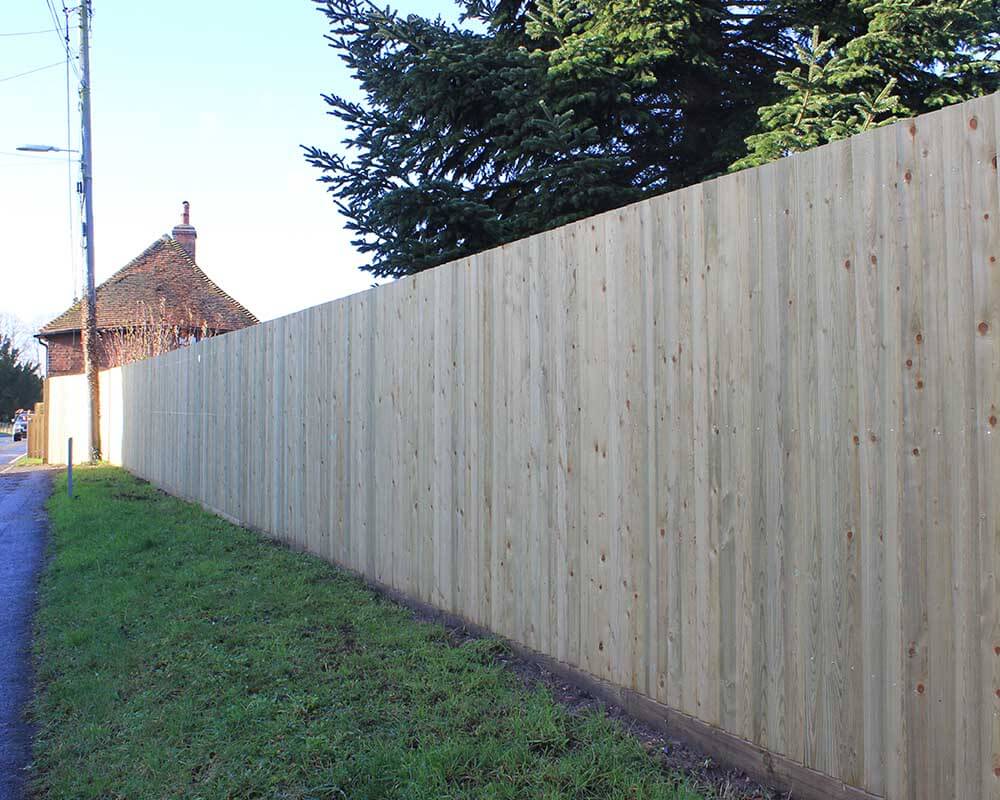 To replace the damaged  boundary fence, Traditional Featherboard was selected. Known for its timeless design Traditional Featherboard has many benefits, one of those taken full advantage of within this project - the ability to be seamlessly raked to follow the lay of the land, which in this garden is a slight downward slope. Instead of installing panels which would have had to be stepped to keep a continual consistent height along the boundary, which is integral for a strong secure fence line, kit form fencing allows for the possibility to install the gravel board to follow the gradient of the slope, and individually place the pales to suit the ground level. 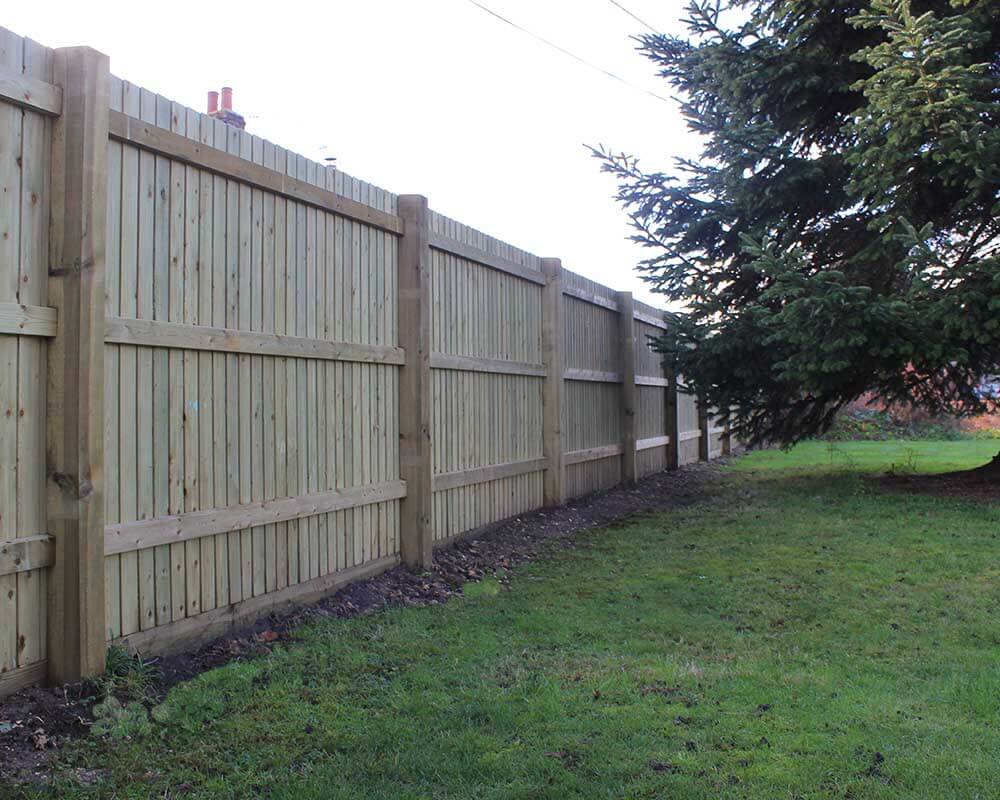 A shorter variation of our Traditional Featherboard was used at the base of the property to take full advantage of the countryside views the property has surrounding it.

Furthermore traditional style or kit form fencing has been designed with the capability to install the standard square section posts behind the pales, therefore creating a clean consistent line without the posts showing when looking at the front of the fence.  As the property is on a main road, the view from the outside was an important factor to the owners to present the house and garden to its full potential.

The fence posts are manufactured with a weathered top, which stops water collecting and sitting on the top of the post, helping to further reduce the chance of wood rot. A flat post top may possibly  lead to the post rotting and damaging the integrity of the panel and post over time especially if the item has not been Jakcure pressure treated. 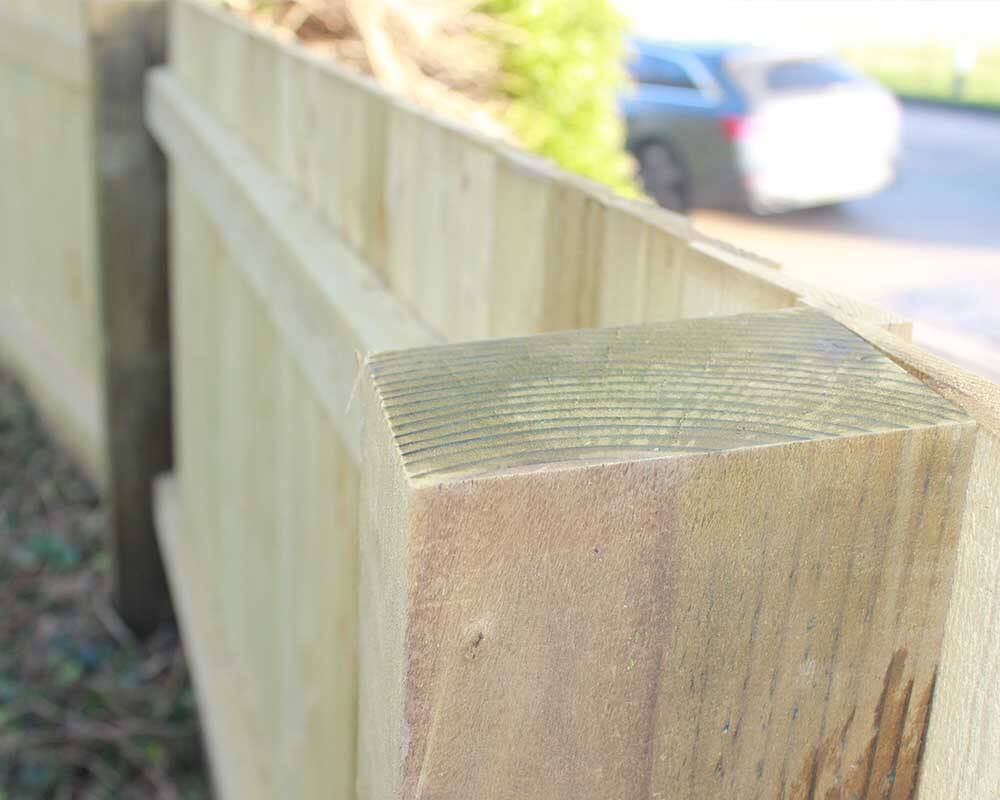 The rails, onto which the pales are installed, are also chamfered to further prevent water from collecting on what would have been a flat surface.

We have made these elements integral parts of our fencing design, and all help to add longevity to our products and allow them to last for 25 years and beyond. 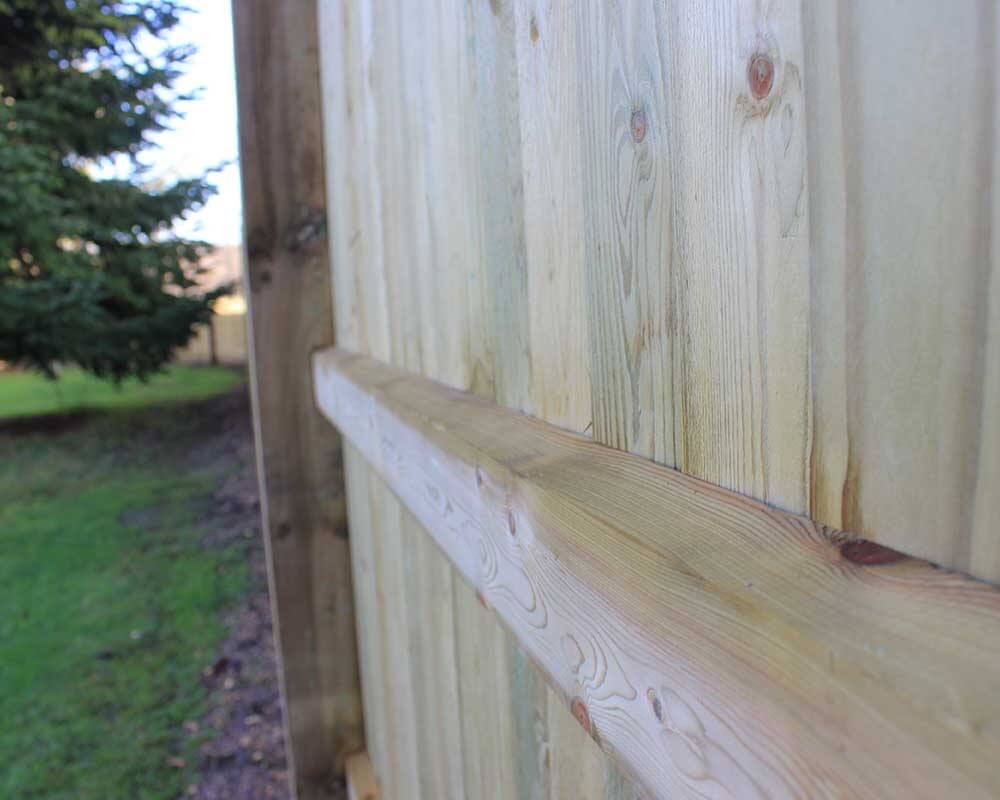 A matching Featherboard gate was installed to allow for access out the rear side and onto the footpath which runs along the base of the property. Fitted with a two way locking steel bar on site, the Featherboard gate offers no weak point for entry that some gates present. We always recommend fitting gates with locks to ensure a heightened level of security to your property. 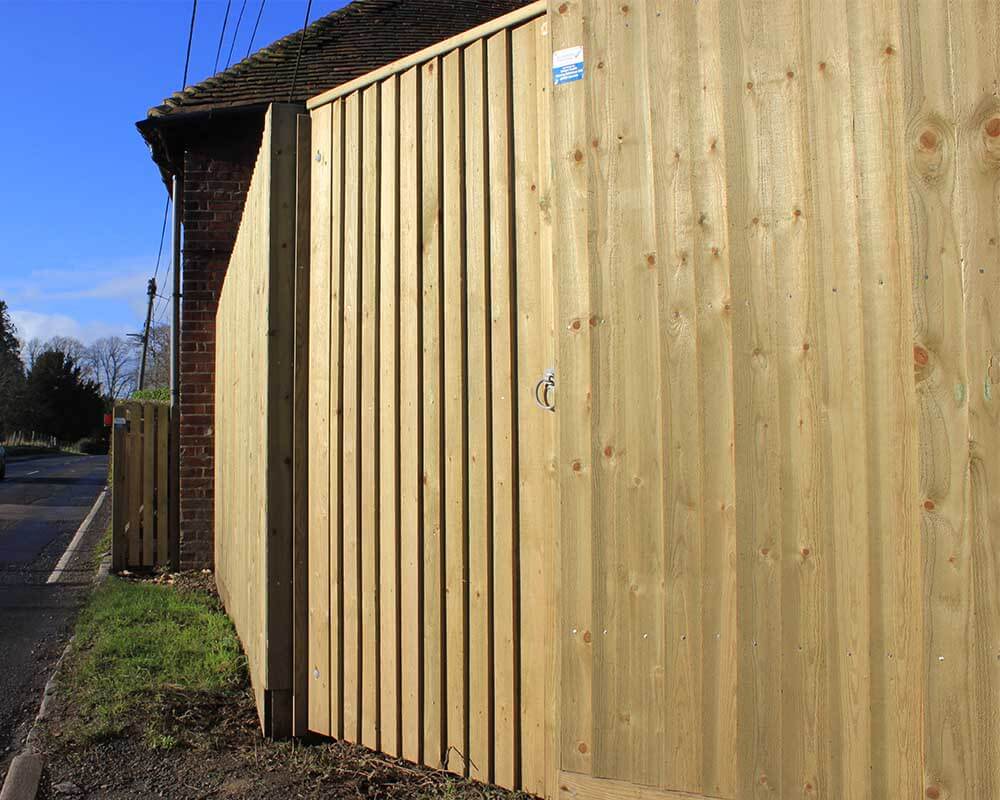 As the project progressed the client felt there was further scope to replace the older pre-existing picket fencing, as the owner didn't want old fencing against new due to the difference in colour between the fencing that run along the front of the property. Rob Smith Fencing Services was instructed to replace the old picket fencing, to in keep with the overall aesthetic of the property.

To keep light flowing into the front of the property, picket or palisade fencing was the best option. By installing short panels (1.2m) were installed, and with gaps between pales the panels became a decorative boundary marker rather than a privacy or security fence panel. 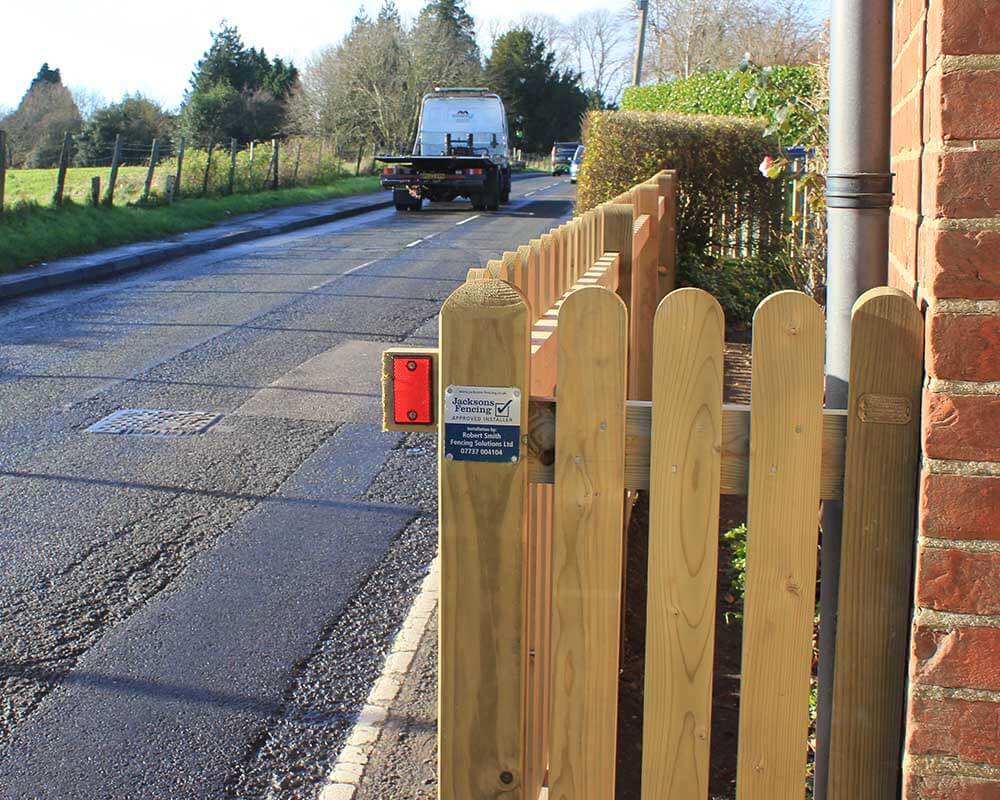 It is worth noting our timber will always naturally age over time turning a distinctive silvery colour. This does not effect the fencings durability or integrity it's just a natural process that occurs as the timber ages.

To ensure the property is visible to drivers, reflectors were installed onto the side of the fence panels which we recommend on any property near the road side.

For the driveway, a 3 metre wide uni gate complete with an auto catch and hold back post were fitted to open from the right, allowing the gate to open onto the neighbouring fence, instead of the house and planting at the entrance to the property. The hold back post, as the name suggests, allows the gate to be held in the open position causing no worry of damaging cars using the driveway or fence behind. The auto catch offers easy access through the gate, with a simple pull to release the gate from the closed position. To close the gate, the gate can simply be pushed against the catch, holding the gate in the shut position. 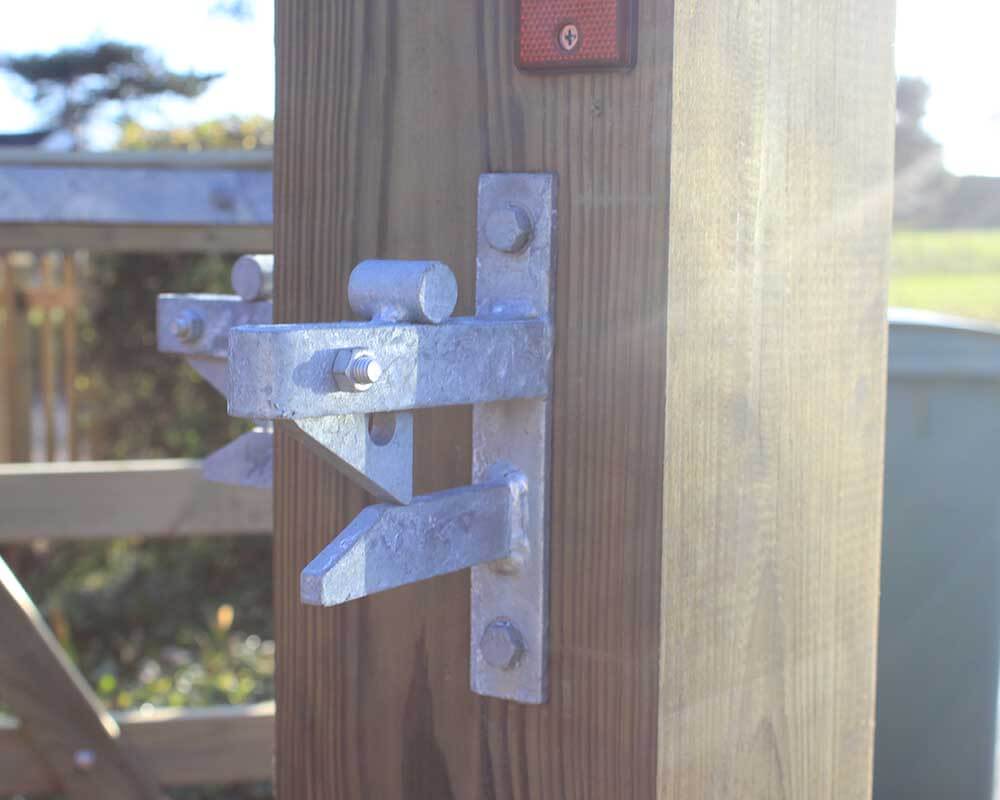 To match the driveway gate, a 0.9m wide uni gate completed the project. Fitted with the same auto catch system, owners and visitors won't struggle and have to fight the gate to get into the property. 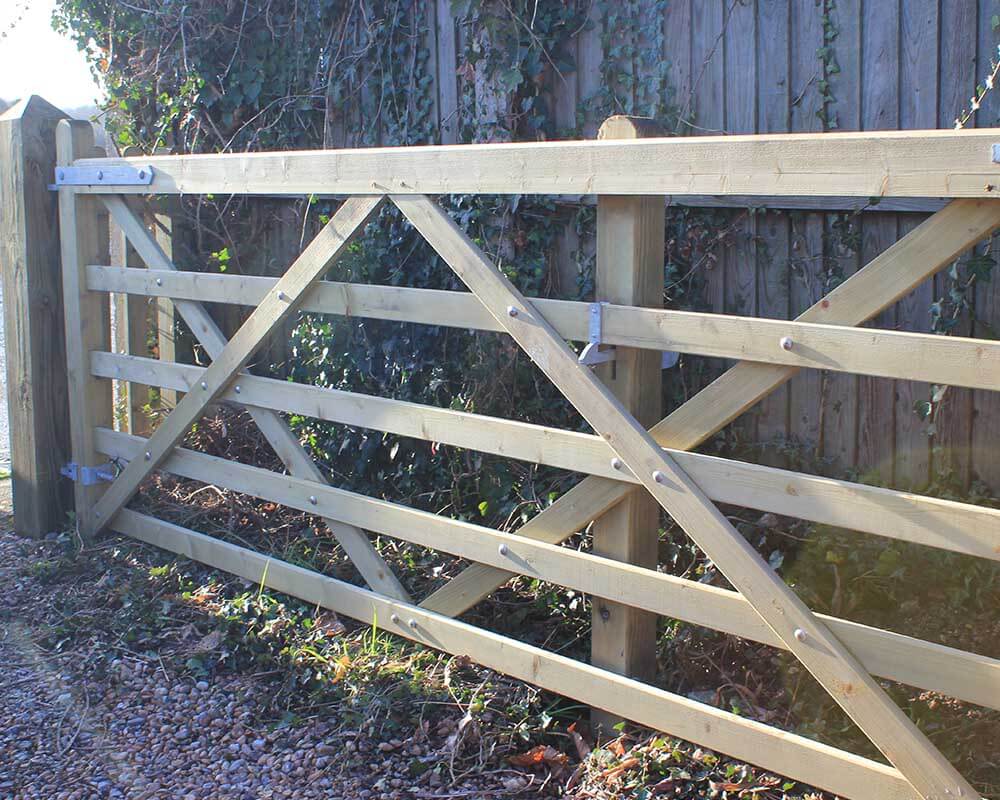 Overall, what started as replacing a section of the fence because the owner had to reinstate the boundary, evolved into a complete overhaul of the property's fencing and gates.

The owner chose our fencing, due to the 25 year guarantee, and the high quality nature of our products, which we know most of our customers also do.