My husband and I took over a 2-acre garden from my mother when she decided that, at the age of 90, she could no longer maintain her previously high standards. Nevertheless, for 2 years she got stuck in and between the 3 of us we planned, measured, dug (endlessly), levelled - and built using Jacksons products, which are consistently of the highest quality.

A central feature of the garden is the pergola that we built from scratch. It is a huge L-shaped structure about 15 metres x 10 metres using 12 x Jacksons 2.7 metre double pergolas, with an additional 6 x single pergolas to form a colonnade. The structure has many purposes. It is fully netted allowing us to grow 50 cherry, plum and pear columnar trees plus apricot/peach and olive bushes inside either side of a wide path; beyond the pergola is an apple orchard with 15 dwarf bush and 15 columnar varieties; and beyond that is an orchard with unusual fruiting shrubs such as Buffalo currants, Saskatoon, Aronia, Autumn olive, Pointilla, Goji, Blue Bean and Sechuan pepper, all edged by rhubarb plants, and with a mulberry tree centrepiece; in front of the pergola is a lovely covered walkway and corner seat, with the netted sides providing support for a Victoria plum fan, a Humbug pear fan and an espalier Bramley apple, interplanted with primocane raspberries; on the slope up to the main lawn is the wildflower meadow. 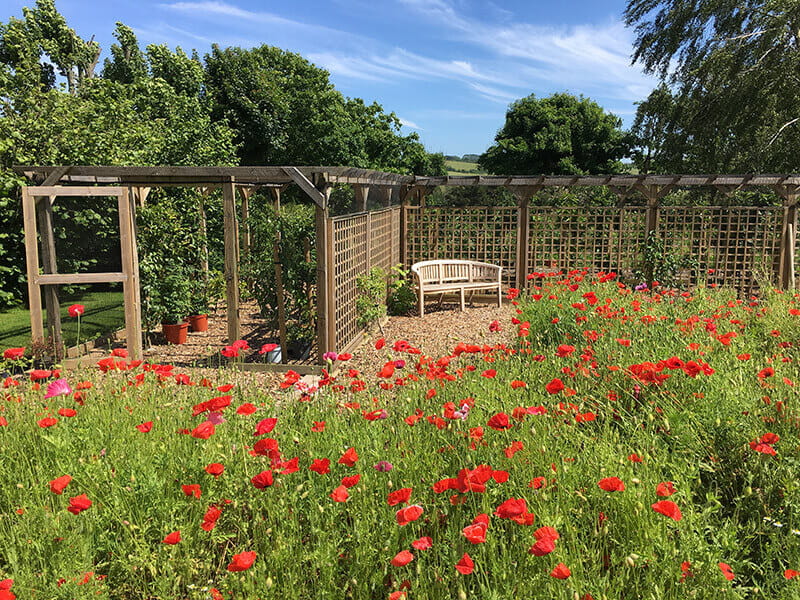 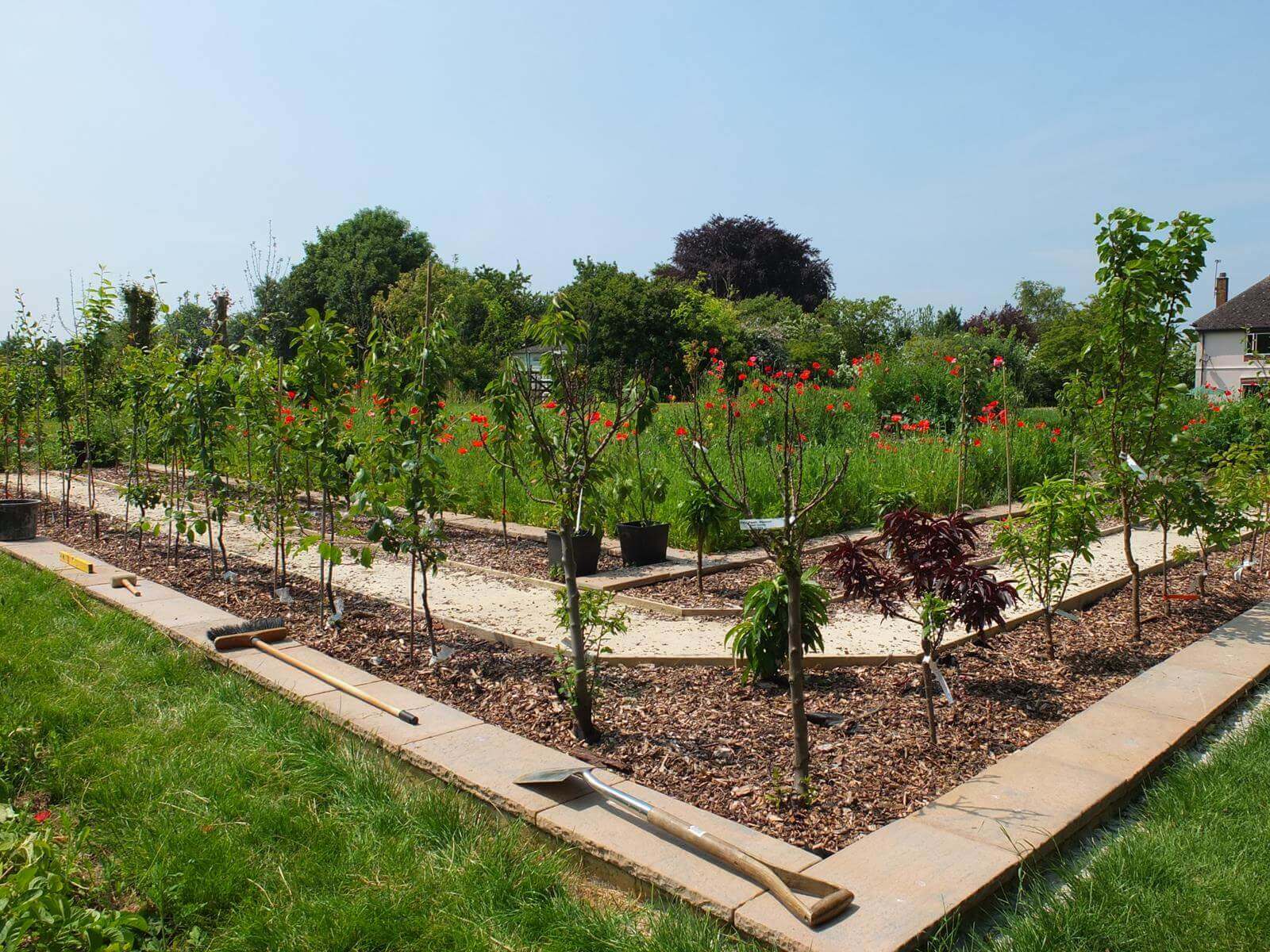 Another key feature of the garden is a former large marquee, stripped of its canvas and its the poles concreted into the ground, the whole being wire netted and acting now as an effective, very large, fruit cage. It allows us to grow gooseberries, currants (black, white, red and pink) and honeyberries, with supports for boysenberry and purple raspberries, plus fig trees in pots either side of a lovely seating area sheltered by Jacksons Venetian panels. 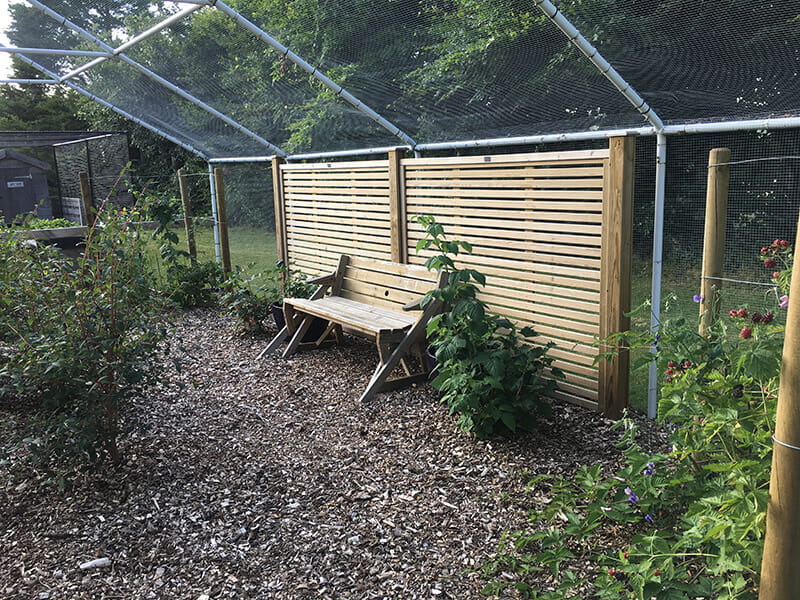 We have a woodland area with a swing seat under a beech hedge canopy and backed by fence panels: the area is dotted with white birch trees set off by a carpet of bluebells in the spring, and shade-loving plants all year round. Near the house is a small secluded pergola using – you’ve guessed it – Jacksons pergola parts, with climbing plants for overhead shade.

We have 3 whippets inside the garden and colonies of rabbits outside so separation is a necessity. 20 years ago, a professional fencer constructed a close boarded fence using Jacksons products – it still stands today. Other fencing includes 2 fences erected ourselves using Jacksons picket fencing for a light, open look but with rabbit proof netting below. 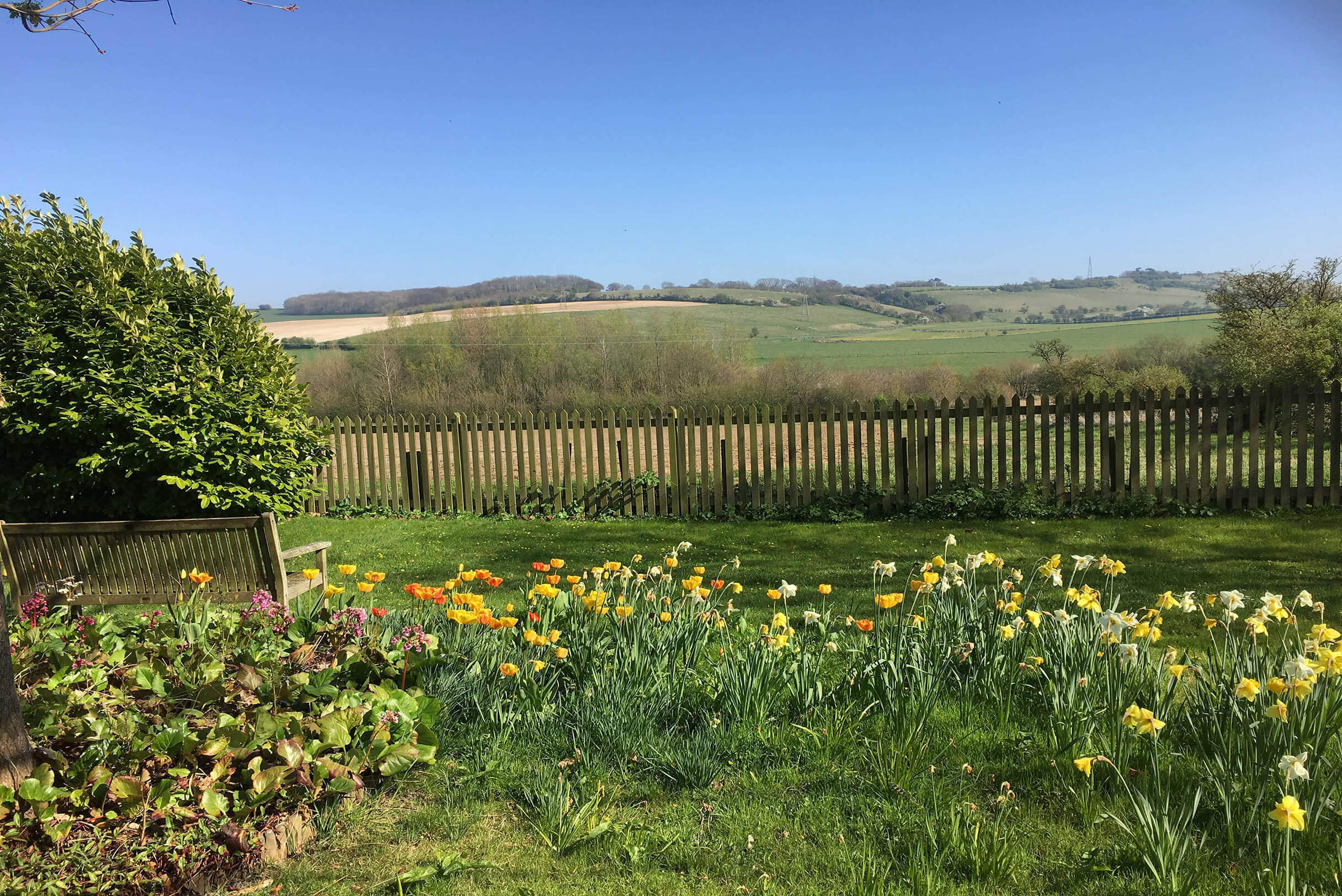 We are coming to the end of a 5-year project to make a low maintenance but productive garden. We have completed various ‘rooms’ – an idea so beloved of garden designers – but always with a view to reducing ongoing maintenance. So there is a no-dig vegetable plot with raised beds and weed-free paths, several fruit cages containing raspberries, trugs for cultivated and alpine strawberries, and raised beds filled with ericaceous soil for blueberries, cranberries, and lingonberries. Near the house is a herb plot with 40-odd different herbs, raised beds for salad crops, a potting area, and a solar shed for propagating and raising plants. Current work in progress is a large polytunnel for all-year salad crops and for overwintering less hardy fruiting shrubs and trees such as Pomegranate, Chilean guava, Arbutus, Drimys and Carolina allspice – plus room for a 6 metre hydroponics bench for autumn and spring salads, herbs and tomatoes (our son has a hydroponics business). 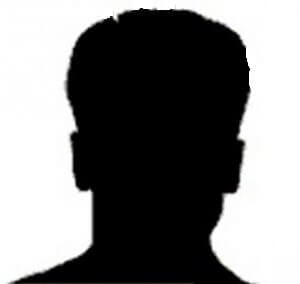